The French have a saying: “Retreat!”.

Sorry, that’s not quite right – they would actually say, “Retraite, uh-huh-huh-huh!”

They have another saying which I like almost as much: “Everything in moderation, including moderation.”

Words to live by this holiday season. So, let’s roll.

Young, dumb, and full of gum.

And at a leisurely 7.6% alcohol, this is exactly what you want to be tapping into on Christmas morning with your eggs and that first sneaky carve of ham.

I have to say first up that I’m a big fan of the House of Ruinart. It has one of the most incredible chalk cellars in Champagne, and the plonk isn’t too bad either.

Old St Nicolas (Ruinart, that is) spruiks some good quality wine w@nkerisms in talking up his product. First we have this gem: “its glistening, pale gold colour with soft green glints seem to reflect the warm summer light...”. And then this: “a subtle, refined nose of acacia and honeysuckle follows through and sings on the palate with lovely elegance and delicacy...“.

All you really need to know is that this is seriously great stuff. It comes served up in a Cristal-emulating clear bottle which shows off its golden curves nicely and adds that little bit of hip-hop mogul caché.

And the drinking is quite simply superb. Ambitious. Capricious. And absolutely delicious.

Be sure to pop the top off a bottle or two this New Year’s Eve.

If the budget doesn’t stretch to Frenchy bubbles, you can quite happily take the more frugal option and go local with this little champ.

Believe you me, I’ve done a lot of research on this topic for you people recently, and can confidently say that this is fully one of the creamiest and most flavoursome Aussie sparklers available on the market today.

I even invented a new word for it: amazifying.

So, there you go. You should definitely buy a couple of these to drink this Christmas. Or maybe just shake them up like a polaroid and pretend like you’ve just won a Grand Prix. At only $20, who really cares.

I must say that I find it really quite hard to like rosé. I have tried, and I have failed.

But I do accept that a lot of you (or more probably your girlfriends) do enjoy this kind of thing. And so, with that in mind, I have searched long and hard for something in this style with a bit of substance.

And this then is the fruit of my labour.

The pretty red sparkles are as gay as Christmas, and the drinking is actually very, very good. Almost meaty, but light and refreshing at the same time.

If you have to put bubbles in your red, I suspect that this is the only way you should be doing it.

Fire Gully is the newish little brother label of the estimable Margaret River stalwart, Pierro. I like them – partly because they sent me free samples – but mostly because they make some cracking wines at decent prices.

The cream of the crop, as you’d expect from Margy, is the Chardonnay.

It’s a nubile concoction of rich, buttery goodness combined with a light and lingering lug of summer fruit. Great badge on the bottle too.

Take the tip from me: whack this little chardy on ice for Christmas lunch, team it up with some turkey and roast tatties, and tuck in.

Best be quick though – or Great Aunty Sharon will pinch the bottle, mix in some ice cubes and start drinking it through a straw. How very, very dare she.

Some find it ubiquitous and insipid, but you just have to find the right one. And this is certainly one of those.

The drinking is like sticking your head straight into a bowl of summer stonefruit. It’s full of flavour and begging to top up its own glass.

I’ve even found a Christmas connection because the nose has an earthy aroma that is pure Christmas pine needle.

If the sun is shining, this is what I’ll be drinking at about 3 o’clock Saturday afternoon between the overs of backyard cricket.

I’m not sure what a Suckfizzle is. It sounds like a euphemism for a dud root, but I’m sure that’s not it.

In any event, this is a frankly sensational wine and if you want to impress the relatives, this is just the ticket. At $42 a pop, it’s not cheap, but it’s definitely worth it.

Big, citrusy, and unctuous. If you’re a seafood family on Christmas, this is unquestionably what you should be sucking down with your prawns.

Special. Like fried rice. And definitely not a fizzler.

If it’s cold and wet on Christmas day as promised, you might be searching for something warm and with a bit of body. And a tasty Shiraz wouldn’t be bad either.

This little fellow has an awesomely earthy and intense smell – like going truffling in the soil with your own nose.

The drinking is full of dark cherries and chocolate, cloves and cinnamon. And we all know that everything tastes better with cinnamon. 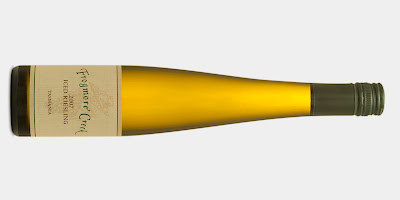 What is it with all the Tasmanian wine in this list? You'd expect most Taswegians would be too busy shagging their sisters to have time to make decent wine, but they are clearly a talented bunch of multi-taskers down there in the crotchal region of the nation.

This gear is the perfect end to a big meal. Grab a wedge of sharp cheese, a slice of whatever fruit is lying about, a couple of bikkies, and a nice little glass of this baby.

It's not as heavy or intense as Noble One, but it certainly doesn't lack in flavour. It's limey, luscious and long in the mouth.

Just a glass will do. And then settle in for a quick power nap to recharge the batteries for a second sitting of Christmas fare.

By the end of Christmas day, when the rellies are sitting around half cut and grinning from beer to beer, the last thing anyone usually feels like is more food.

Generally, all you need is a thin slice of Christmas cake, maybe a fruit mince pie, and something wet to wash it down with.

And this is the answer. The illustrious Noble One forms the base of this fortified gem which tells you most of what you need to know.

It is a soporific pharmacopoeia of intense golden elixer. It's thick and rich and coats your mouth with a concentration of everything that is Christmas.

Stick a fork in me. I'm done. The perfect end to the day.

With Bono and the boys rocking BrisVegas tonight, I thought it was an appropriate time to tuck into this topically named youngster.

The Claymore Joshua Tree Riesling hails from the Clare Valley, which is always a good place to look for quality riesling.

The Clare is a rugged sort of place. Some might say it’s a place where the streets have no names. Where all the colours bleed into one and the landscape turns into rust: beaten and blown by the wind and trampled in dust.

But it’s a fact that the best grapes are often borne out of the toughest patches of dirt. And so it is with the Joshua Tree Riesling. It’s a little ripper.

It smells sweetly like coconut oil sunscreen smeared on a lightly toasted German backpacker named Heidi. There's also a floral note that may or may not be lent by Heidi's limey daiquiri.

The drinking is like kissing honeyed lips. It delivers yielding deliciousness, accompanied by a stirring feeling of rigidity. It’s mouth-wateringly crisp and just a little bit punchy. In short, it’s cool, delicious and quite simply superb.

Granted, it hasn’t been too hot so far this December. But by the time Christmas rolls around, it will be baking and you’ll be begging for some nice, cool refreshment.

And so, when you sit down with your plate of leftover turkey to watch the Boxing Day Test, do yourself a favour and pour yourself a nice chilly glass of the Claymore. I’ve got a feeling you might need a drink regardless of the weather (unless of course you’re South African English).

And at only $18 for the Joshua Tree, I think I might actually have found what I’m looking for.

But you'll have to get your own. Because this Claymore is mine.

All I know is that I’m going to enjoy it. With or without you.

Me
This site is a running commentary of whatever I happen to be drinking at the moment. I try to keep it positive and restrict it to wines that I can recommend to you. Occasionally, if I come across a wine that is really bad, I might feel compelled to write about it by way of warning. I also try to mainly review current vintages and wines that will be generally available for you to buy. Certainly, I claim no formal expertise in wine. Just a couple of courses, and the life experience of consuming more than my fair share of wine over the years. The inspiration for this site came from reading too many "wanky" wine reviews - ones where the "expert" refers to every fruit in the orchard and can apparently taste things never intended to be put in your mouth. My notes are intended to be a bit less serious (and hopefully, a little more humorous). I also hope they are more relevant to the everyday person, and impart a general understanding of not only the wines, but also vineyards and regions. If I ever get too wanky, my rebuttal is that it’s intended only for comedic value. But if you think I’m ever in danger of becoming a true vinous onanist, let me know.